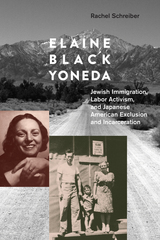 During World War II, Elaine Black Yoneda, the daughter of Russian Jewish immigrants, spent eight months in a concentration camp—not in Europe, but in California. She did this voluntarily and in solidarity, insisting on accompanying her husband, Karl, and their son, Tommy, when they were incarcerated at the Manzanar Relocation Center. Surprisingly, while in the camp, Elaine and Karl publicly supported the United States’ decision to exclude Japanese Americans from the coast.

Elaine Black Yoneda is the first critical biography of this pioneering feminist and activist. Rachel Schreiber deftly traces Yoneda’s life as she became invested in radical politics and interracial and interethnic activism. In her work for the International Labor Defense of the Communist Party, Yoneda rose to the rank of vice president. After their incarceration, Elaine and Karl became active in the campaigns to designate Manzanar a federally recognized memorial site, for redress and reparations to Japanese Americans, and in opposition to nuclear weapons.

Schreiber illuminates the ways Yoneda’s work challenged dominant discourses and how she reconciled the contradictory political and social forces that shaped both her life and her family’s. Highlighting the dangers of anti-immigrant and anti-Asian xenophobia, Elaine Black Yoneda recounts an extraordinary life.

Rachel Schreiber is Executive Dean of The New School's Parsons School of Design. She is the author of Gender and Activism in a Little Magazine: The Modern Figures of the Masses and the editor of Modern Print Activism in the United States.