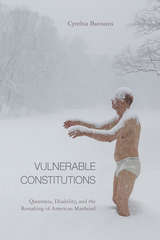 Barounis introduces the concept of “anti-prophylactic citizenship”—a mode of political belonging characterized by vulnerability, receptivity, and risk—to examine counternarratives of American masculinity. Investigating the work of authors including London, William Faulkner, James Baldwin, and Eli Clare, she presents an evolving narrative of medicalized sexuality and anti-prophylactic masculinity. Her literary readings interweave queer theory, disability studies, and the history of medicine to demonstrate how evolving scientific conversations around deviant genders and sexualities gave rise to a new model of national belonging—ultimately rewriting the story of American masculinity as a story of queer-crip rebellion.

Cynthia Barounis is a lecturer in the Department of Women, Gender, and Sexuality Studies at Washington University in St. Louis.