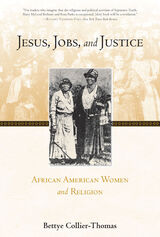 Jesus, Jobs, and Justice: African American Women and Religion
by Bettye Collier-Thomas
Temple University Press, 2013
Paper: 978-1-4399-1105-1
Bettye Collier-Thomas’s groundbreaking book, Jesus, Jobs, and Justice—now available for the first time in paperback—provides a remarkable account of the religious faith, social and political activism, and extraordinary resilience of black women during the centuries of American growth and change. As co-creators of churches, women were a central factor in their development. However, women often had to cope with sexism in black churches, as well as racism in mostly white denominations.

Collier-Thomas skillfully shows how black church women created national organizations such as the National Association of Colored Women, the National League of Colored Republican Women, and the National Council of Negro Women to fight for civil rights and combat discrimination. She also examines how black women missionaries sacrificed their lives in service to their African sisters whose destiny they believed was tied to theirs.

While religion has been a guiding force in the lives of most African Americans, for black women it has been essential. Jesus, Jobs, and Justice restores black women to their rightful place in American and black history and demonstrates their faith in themselves, their race, and their God.
AUTHOR BIOGRAPHY
Bettye Collier-Thomas is Professor of History at Temple University. She is the author of Daughters of Thunder: Black Women Preachers and Their Sermons and co-editor of Sisters in the Struggle: African American Women in the Civil Rights–Black Power Movement.
REVIEWS
“Bettye Collier-Thomas tells the untold stories of scores of religious and politically active black women, their organizations, informal gatherings and intellectual movements. For readers who imagine that the religious and political activism of Sojourner Truth, Mary McLeod Bethune and Rosa Parks is exceptional, [this] book will be a revelation.”—The New York Times Book Review

TABLE OF CONTENTS
Contents
List of Illustrations
Prologue
1. “Soul Hunger”: In Slavery and Freedom
2. “Taxation Without Representation”: Religious Leadership
3. “A Woman’s Church Within the Church”: The Woman’s Movement in the Church
4. “The Relief Corps of Heaven”: Women and Missions
5. “Righteous Guidance”: Religion and Politics
6. Across the Divide: The Interracial and Interdenominational Movement
7. “Womanpower”—Religion, Race, Gender: Consolidation of a Movement
8. “Jesus, Jobs, and Justice”: The Black Women’s Agenda
Coda
Acknowledgments
Abbreviations
Notes
Index
REQUEST ACCESSIBLE FILE