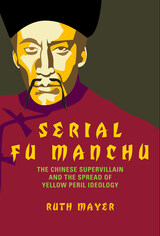 The evil mastermind—and master of disguise—Fu Manchu has long threatened to take over the world. In the past century, his dastardly plans have driven serialized novels, comic books, films, and TV. Yet this sinister Oriental character represents more than an invincible criminal in pop culture; Fu Manchu became the embodiment of the Yellow Peril.
Serial Fu Manchu provides a savvy cultural, historical, and media-based analysis that shows how Fu Manchu’s irrepressibility gives shape to—and reinforces—the persistent Yellow Peril myth. Ruth Mayer argues that seriality is not merely a commercial strategy but essential to the spread of European and American fears of Asian expansion.
Tracing Fu Manchu through transnational serials in varied media from 1913 to the 1970s, Mayer shows how the icon evolved. She pays particular attention to the figure’s literary foundations, the impact of media changes on his dissemination, and his legacy.

In the series Asian American History and Culture, edited by Sucheng Chan, David Palumbo-Liu, Michael Omi, K. Scott Wong, and Linda Trinh Võ
AUTHOR BIOGRAPHY
Ruth Mayer holds the chair of American Studies at Leibniz University in Hanover, Germany. She is the editor of Trans-Pacific Interactions: The USA and China, 1880-1950, and Chinatowns in a Transnational World: Myths and Realities of an Urban Phenomenon.
TABLE OF CONTENTS


Acknowledgments
1  Going Serial: Fu Manchu, the Yellow Peril, and the Machinic Momentum of Ideology
2  Enter Fu Manchu: The Transatlantic Periodical Press and the Circulation of Stories and Things
3  Image Power: Seriality, Iconicity, and the Filmic Fu Manchus of the 1930s
4  Machinic Fu Manchu: Popular Seriality and the Logic of Spread
5  Evil Chinamen: Yellow Peril Comics and the Ideological Work of Popular Seriality
6  The End of the Assembly Line: Seriality, Ideology, and Popular Culture
References
Index