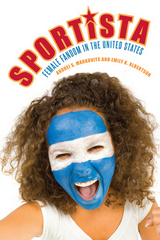 The typical female sports fan remains very different from her male counterparts. In their insightful and engaging book, Sportista, Andrei S. Markovits and Emily Albertson examine the significant ways many women have become fully conversant with sports—acquiring a knowledge of and passion for them as a way of forging identities that until recently were quite alien to women.

Sportista chronicles the relationship that women have developed with sports in the wake of the second wave of feminism of the late 1960s and early 1970s. The changes women athletes have achieved have been nothing short of revolutionary. But, as Markovits and Albertson argue, women’s identities as sports fans, though also changed in recent decades, remain notably different from that of men. Sportista highlights the impediments to these changes that women have faced and the reality that, even as bona fide fans, they “speak” sports differently from and remain largely unaccepted by men.

In the series Politics, History and Social Change, edited by John C. Torpey

Andrei S. Markovits is Arthur F. Thurnau Professor and the Karl W. Deutsch Collegiate Professor of Comparative Politics and German Studies at the University of Michigan. He has published prolifically on German and European politics and on sports. His most recent book is Gaming the World: How Sports Are Reshaping Global Politics and Culture.

1 Youth
The Origins of Gender Difference in Sport

5 Sportista I: Professional Women in the Contested Space of Sports Media
Issues of Entry and Acceptance

6 Sportista II: Following as a Hobby, the A-Typical Female Sports Fan
Superfans in Their Own Right, with Their Own Voice, and Speaking Their Own Language