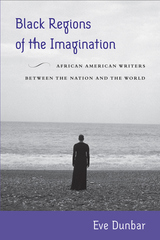 Zora Neale Hurston, Richard Wright, James Baldwin, and Chester Himes were all pressured by critics and publishers to enlighten mainstream (white) audiences about race and African American culture. Focusing on fiction and non-fiction they produced between the Harlem Renaissance and the Black Arts Movement, Eve Dunbar’s important book, Black Regions of the Imagination, examines how these African American writers—who lived and traveled outside the United States—both document and re-imagine their “homegrown” racial experiences within a worldly framework.

From Hurston’s participant-observational accounts and Wright’s travel writing to Baldwin’s Another Country and Himes’ detective fiction, these writers helped develop the concept of a “region” of blackness that resists boundaries of genre and geography. Each writer represents—and signifies—blackness in new ways and within the larger context of the world. As they negotiated issues of “belonging,” these writers were more critical of social segregation in America as well as increasingly resistant to their expected roles as cultural “translators.”

Introduction
1 Becoming American through Ethnographic Writing: Zora Neale Hurston and the Performance of Ethnography
2 Escape through Ethnography: Literary Regionalism and the Image of Nonracial Alignment in Richard Wright’s Travel Writing
3 Deconstructing the Romance of Ethnography: Queering Knowledge in James Baldwin’s Another Country
4 Ethnography of the Absurd: Chester Himes’s Detective Fiction and Counterimages of Black Life
Conclusion: Look Down! The Black Arts Affirmation of Place and the Refusal to Translate