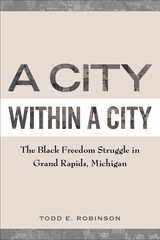 A City within a City examines the civil rights movement in the North by concentrating on the struggles for equality in Grand Rapids, Michigan. Historian Todd Robinson studies the issues surrounding school integration and bureaucratic reforms as well as the role of black youth activism to detail the diversity of black resistance. He focuses on respectability within the African American community as a way of understanding how the movement was formed and held together. And he elucidates the oppositional role of northern conservatives regarding racial progress.

A City within a City cogently argues that the post-war political reform championed by local Republicans transformed the city's racial geography, creating a racialized "city within a city," featuring a system of "managerial racism" designed to keep blacks in declining inner-city areas. As Robinson indicates, this bold, provocative framework for understanding race relations in Grand Rapids has broader implications for illuminating the twentieth-century African American urban experience in secondary cities.

AUTHOR BIOGRAPHY
Todd E. Robinson is Assistant Professor of History at the University of Nevada, Las Vegas.
TABLE OF CONTENTS

1 “Rowing, Not Drifting”: Black Organizational Reform before World War II
2 Citizens’ Action: Managerial Racism and Reform Politics
3 The Suburban Oasis: The Origins of Segregated Space
4 The Mustache Saga: The Rise of Black Youth Protest
5 A Black Child’s Burden: Busing to Achieve Racial Balance
6 Where Do We Go from Here? Setting the Course for Racial Reconciliation
Conclusion: Secondary Cities and the Black Experience