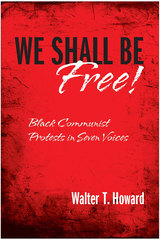 A groundbreaking contribution to scholarship of the African American Left, We Shall Be Free! gives voice to black Communists and recognizes the intellectual contributions found in their protest writings. Walter Howard provides a fascinating documentary history of seven diverse and historically significant black Communists--B.D. Amis, Harry Haywood, James W. Ford, Benjamin J. Davis, Jr., Louise Thompson Patterson, William Patterson, and Claudia Jones--who attempted to foster a black culture of resistance to white racism within the workings of the Communist Party.

Howard draws on FBI files, Moscow documents, and the records of the U.S. Communist Party. He surveys these black Communists addressing a wide range of vital issues such as the Great Depression, World War II, genocide and the Cold War.

We Shall Be Free! presents an important section of the African American community whose thought has been minimized, discounted, or overlooked altogether by the historical profession in general.

AUTHOR BIOGRAPHY
Walter T. Howard is Professor of American History at Bloomsburg University in northeastern Pennsylvania. He is the editor of B.D. Amis, African American Radical: A Short Anthology of His Writings and Speeches and the author of Lynchings: Extralegal Violence in Florida during the 1930s as well as Black Communists Speak on Scottsboro: A Documentary History.
TABLE OF CONTENTS