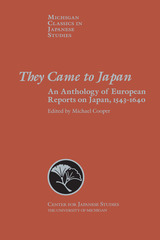 They Came to Japan: An Anthology of European Reports on Japan, 1543-1640
edited by Michael Cooper
University of Michigan Press, 1995
Paper: 978-0-939512-73-7
The Japan accidentally discovered by the Europeans in 1543 was a country torn by internecene wars waged by independent barons who recognised no effective central government and were free to appropriate as many neighbouring fiefs as force of arms and treachery would permit. The Japan which deported the Europeans a century later was a stable, highly centralised bureaucracy under the firm control of a usurping family which was to continue to rule the country until well into the Victorian age. Europeans living in Japan at the time have not only recorded the events of this fascinating period but also provided a picture of sixteenth- and seventeenth-century Japanese life. Apart from a few lacunae, a remarkably full description of the country in this century—its history, people, traditions, culture, and religion—can be pieced together.
They Came to Japan collects and translates excerpts from more than thirty early European accounts of Japan, many previously unpublished and extremely rare. Arranged into thematic chapters on aspects of Japanese society, these commentaries are most interesting not for what they say about the Japan but about the European writers themselves. Their attitude towards the newly discovered country and its inhabitants is clearly reflected in their letters and reports, especially when implicit comparisons are made between Japan and Europe. During the course of their discovery of the East, the Europeans had generally adopted the role of representatives of a superior race. They had taken for granted that Europe was synonymous with the civilised world, and thus the discovery of the highly developed Japanese culture and civilisation, which had grown up quite independently of Europe, came as a salutary shock. Because they could not aggressively assert themselves by force of arms in such a remote place, as was their norm, this was to be the first confrontation between East and West on equal terms.
AUTHOR BIOGRAPHY
Michael Cooper obtained a doctorate from the University of Oxford. He was the editor of the academic journal, Monumenta Nipponica in Tokyo for 26 years. He has written extensively on early Japanese-European cultural relations.
REQUEST ACCESSIBLE FILE