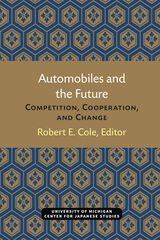 At the time of the U.S.-Japan auto conferences in March 1983, the hoped-for economic recovery as manifested in auto sales had revealed itself quite modestly. Three months later, the indicators were more robust and certainly long overdue for those whose livelihood depends on the health of the industry--some of whom are university professors.
With Japanese import restrictions in place until March 1984 and drastically reduced break-even points for domestic manufactures, rising consumer demand holds great promise for the industry. The rapidly rising stock prices of the auto-makers captures well the sense of heightened optimism, as do the various forecasts for improved profits.
While the news is certainly welcome, it nevertheless should be greeted with caution. As Mr. Perkins noted at the conference, "we have a tendency to forget things very quickly. If we have a boom market this year, there is a good chance that a lot of things we learned will be forgotten."
To put the matter differently and more bluntly, with growing prosperity there is the risk that management will fall back into old habits, making impossible the achievement of sustained quality and productivity improvement. Similarly, the commitment to develop cooperative relations with workers and suppliers will weaken. The union will be under membership pressure to retrieve concessions rather than to take the longer-term view. This longer-term view recognizes that "up-front increases" and adherence to existing work rules increasingly come at the sacrifice of future job security. Government policymakers will turn their attention away from the industry. This may not mean a great deal given how weakly focused their attentions has been during the last three years and how mixed and contradictory government auto policies have been for over a decade.
AUTHOR BIOGRAPHY
Robert E. COLE is Profosser of Sociology at University of Michigan.
TABLE OF CONTENTS
Cover
Title
Copyright
Contents
Preface
Introduction
Opening Statement
Competition and Auto Trade: A Technological Perspective
Internationalization of the Japanese Auto Industry: Real Progress or a Snail's Pace
Prospects and Consequences of American-Japanese Company Cooperation
Opportunities and Barriers to Union and Worker Cooperation with Management
Responses of Conference Panelists to Audience Questions
Auto Trade: Prospects and Pitfalls
Question and Answer Session with David Macdonald
Future Automotive Factories: Speculative Models
The Automobiles of the Future
Comparison of U.S.-Japan Production Costs: An Assessment
Responses of Conference Panelists to Audience Questions
Summation
REQUEST ACCESSIBLE FILE