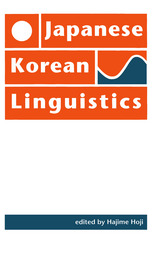 Japanese and Korean are typographically quite similiar, so a linguistic phenomenon in one language often has a counterpart in the other. The papers in this volume are intended to further collective and collaborative research into both languages.

The contributors discuss aspects of language acquisition, sociolinguistics, pragmatics, phonology, syntax, morphologyu, and semantics. Most of the papers were presented at the Southern Californai Japanese/Korean Linguistics Conference in 1989.

Hajime Hoji is a professor of linguistics at the University of Southern California.

Distributed for the Center for the Study of Language and Inforamtion
TABLE OF CONTENTS
Cover
Preface
Table of Contents
Cognitive and Syntactic Bases of Topicalized and Nontopicalized Sentences in Japanese
Part 1: Acquisition, Discourse, Pragmatics, and Typology
The Sentence-Final Particle Ne as a Tool for Cooperation in Japanese Conversation
Parameter Settings in the L2 Acquisition of English Reflexives
How Languages Encode the Cognitive Notion of Directness and Indirectness: A Typological Study
Continuity of Action and Topic in Discourse
A Pragmatic Account of the Distribution of Come and Go in English, Japanese, and Korean
Conflict Avoidance in Social Interaction: A Sociolinguistic Comparison of the Korean and Japanese Honorific Systems
WA and GA: From the Perspective of the Deictic Center in Discourse
Part 2: Phonology
Parameters of Consonantal Assimilation in Japanese and Korean
Sound Changes in Korean: An Underspecificational Approach
Glide Formation in Korean
Underspecification and Phoneme Substitution
A Comparison of Korean and Japanese Pitch-Accent from a Prosodic Perspective
Part 3: Syntax and Morphology
On Light Verb Constructions in Korean and Japanese
Subjects and Predication in Korean and Japanese
On "Aboutness Conditions"
Constraints on the 'Intransitivizing' Resultative -te aru Construction in Japanese
N'-Deletion in Japanese: A Preliminary Study
Control Structures in Japanese
VP in Japanese: Evidence from -te Complements
Unaccusative Nouns and Resultatives in Japanese
Part 4: Syntax and Semantics
Counterfactual Concessive Conditionals in Japanese
The Proper Treatment of 'Every' and 'Some' in Japanese
Markers of Distributivity in Japanese and Korean
Where Do Constrastive and Focus Readings Come From?
The Scope Interaction of Wh-word and Quantifier
Index
Back Cover