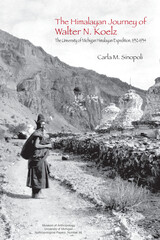 In the fall of 1932, University of Michigan naturalist Walter N. Koelz traveled to northwest India to lead a scientific collecting expedition in the rugged Himalayan regions of Western Tibet. Some eighteen months later he returned to the United States with a remarkable collection of biological specimens and an array of objects—Buddhist paintings, ritual objects, textiles, and household goods—acquired from monasteries, households, and merchants. This book presents the diary entries Koelz wrote at the end of each day throughout his expedition, recounting in detail each day’s travels, bookended by a chapter contextualizing his acquisition of sacred Buddhist objects and an appendix that presents previously unpublished thangka paintings that he collected.