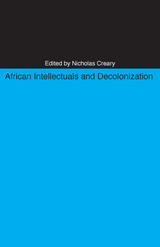 Decades after independence for most African states, the struggle for decolonization is still incomplete, as demonstrated by the fact that Africa remains associated in many Western minds with chaos, illness, and disorder. African and non-African scholars alike still struggle to establish the idea of African humanity, in all its diversity, and to move Africa beyond its historical role as the foil to the West.

As this book shows, Africa’s decolonization is an ongoing process across a range of fronts, and intellectuals—both African and non-African—have significant roles to play in that process. The essays collected here examine issues such as representation and retrospection; the roles of intellectuals in the public sphere; and the fundamental question of how to decolonize African knowledges. African Intellectuals and Decolonization outlines ways in which intellectual practice can serve to de-link Africa from its global representation as a debased, subordinated, deviant, and inferior entity.

Nicholas M. Creary teaches African history in the Department of Africana Studies at the University at Albany. He is the author of Domesticating a Religious Import: The Jesuits and the Inculturation of the Catholic Church in Zimbabwe, 1879–1980.

REVIEWS
“A knowledge of old school Black intellectualism in the Americas and Africa may serve as a prerequisite to these readings, but one can still enjoy this work without a prior awareness of the history. This book is must for all aspiring and functional Black intellectuals!”—Examiner.com

TABLE OF CONTENTS
Contents
Introduction
Part I: Representation and Retrospection
We Need a Mau Mau in Mississippi
Nkrumah/Lumumba
Trauma and Narrativity in Aidichie's Half of a Yellow Sun
Part II: Decolonizing Public Spheres: Conflicts and Negotiations
The Emergent Self in South African Black Conciousness Literature and Discourse
The Public Life of Reason
Setting the Agenda for Decolonizing African Media Systems
The African Renaissance and Discourse Ownership
Part III: Decolonizing Knowledge: Intellectual Imperatives and Epistemic Dialogues
Decolonization and the Practice of Philosophy
Beyond Gendercentric Models
Index