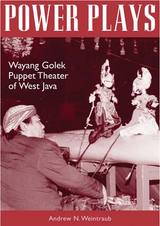 Based on ethnographic fieldwork spanning twenty years, Power Plays is the first scholarly book in English on wayang golek, the Sundanese rod-puppet theater of West Java. It is a detailed and lively account of the ways in which performers of this major Asian theatrical form have engaged with political discourses in Indonesia. Wayang golek has shaped, as well, the technological and commercial conditions of art and performance in a modernizing society.

Using interviews with performers, musical transcriptions, translations of narrative and song texts, and archival materials, author Andrew N. Weintraub analyzes the shifting and flexible nature of a set of performance practices called Padalangan, the art of the puppeteer. He focuses on “superstar” performers and the musical troupes that dominated wayang golek during the New Order political regime of former president Suharto (1966-98) and the ensuing three years of the post-Suharto period. Studies of actual performances illuminate stylistic and formal elements and situate wayang golek as a social process in Sundanese culture and society. Power Plays includes an interactive multimedia CD-ROM of wayang golek.

Power Plays shows how meanings about identity, citizenship, and community are produced through theater, music, language, and discourse. While based in ethnographic theory and methods, this book is at the center of a new synthesis emerging among ethnomusicology, anthropology, and cultural studies. Its cross-disciplinary approach will inspire researchers studying similar struggles over cultural authority and popular representation in culture and the performing arts.
TABLE OF CONTENTS