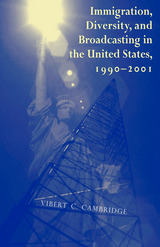 The last decade of the twentieth century brought a maturing of the new racial and ethnic communities in the United States and the emergence of diversity and multiculturalism as dominant fields of discourse in legal, educational, and cultural contexts. Immigration, Diversity, and Broadcasting in the United States, 1990—2001 is a contribution to our understanding of the web of relationships that existed at the intersection of immigration, race, ethnicity, and broadcasting in America during this period.

Professor Vibert C. Cambridge investigates and questions how broadcasting in the United States responded to the changing racial and ethnic composition of the society. What patterns could be drawn from these responses? What roles were served? What roles are currently being served? What stimulated the changing of roles?

Ultimately, Immigration, Diversity, and Broadcasting in the United States evaluates the performance of the American broadcasting industry. The answers to this book's core questions provide insights into how the American broadcasting industry responded to freedom, equality, diversity, information quality, social order, and solidarity at century’s end.
AUTHOR BIOGRAPHY
Vibert C. Cambridge is an associate professor of telecommunications and chair of the department of African American studies at Ohio University.
TABLE OF CONTENTS