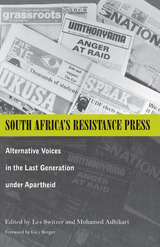 South Africa's Resistance Press is a collection of essays celebrating the contributions of scores of newspapers, newsletters, and magazines that confronted the state in the generation after 1960. These publications contributed in no small measure to reviving a mass movement inside South Africa that would finally bring an end to apartheid. This marginalized press had an impact on its audience that cannot be measured in terms of the small number of issues sold, the limited amount of advertising revenue raised, or the relative absence of effective marketing and distribution strategies. These journalists rendered communities visible that were too often invisible and provided a voice for those too often voiceless. They contributed immeasurably to broadening the concept of a free press in South Africa. The guardians of the new South Africa owe these publications a debt of gratitude that cannot be repaid.