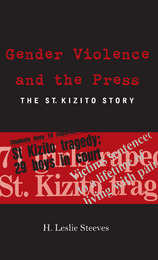 On the night of Saturday, July 13, 1991, a mob of male students at the St. Kizito Mixed Secondary School in Meru, Kenya, attacked their female classmates in a dormitory. Nineteen schoolgirls were killed in the melee and more than 70 were raped or gang raped.

The explanations in the press for the attack included a rebellion by male students over administrative mismanagement, academic stress, cultural norms for the Meru ethnic group, and victim characteristics (as assumed in rape myths). Rape had been tolerated at the school, according to press accounts.

Dr. Steeves studied all stories published in three Nairobi daily newspapers and a weekly Kenyan newsmagazine for the year following the crime. She also examined a sampling of international reports. Her qualitative analysis sought to identify “framing patterns” supportive of patriarchal or of feminist ideologies of rape, and the ways in which those patterns have been affected by news values and traditions. Gender Violence and the Press shows how media discourse may allow space for feminist interests within the dominant patriarchal ideology. In this instance, the appearance of resistant views was significant in making alternative meanings available and in supporting women’s growing anti-violence activism.

H. Leslie Steeves is an Associate Professor in the School of Journalism at the University of Oregon. Dr. Steeves has had two Fulbright grants for teaching and research in Africa and was in Kenya on a Fulbright when the St. Kizito crime occurred.