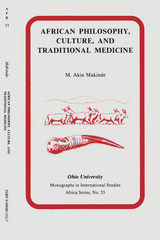 For over two centuries, Western scholars have discussed African philosophy and culture, often in disparaging, condescending terms, and always from an alien European perspective. Many Africans now share this perspective, having been trained in the western, empirical tradition. Makinde argues that, particularly in view of the costs and failings of western style culture, Africans must now mold their own modern culture by blending useful western practices with valuable indigenous African elements. Specifically, Makinde demonstrates the potential for the development of African philosophy and even African traditional medicine.

Following the lead of a number of countries with government policies of incorporating indigenous medicine with orthodox Western medicine, Makinde argues that traditional African practices should be taken seriously, both medically and scientifically. Further, he charges African scholars with the responsibility of investigating these and other elements of traditional African culture in order to dispel their mystery and secrecy through modern research and useful publications.