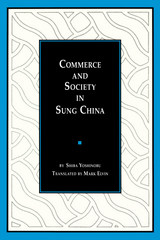 Commerce and Society in Sung China
by Yoshinobu Shiba
translated by Mark Elvin
University of Michigan Press, 1969
Paper: 978-0-89264-902-0
The full dimensions of the medieval Chinese economic revolution are still almost unknown to economic historians in the Western world, and the manifold problems that it raises for accepted theories of economic development have hardly begun to be systematically considered. Japanese scholars have been the pioneers in opening up this field, and Professor Shiba’s Commerce and Society in Sung China is among the most recent and most impressive fruits of their labors. For the first time it is possible to be relatively confident, as the result of the author’s systematic exploitation of an enormous range of source materials, about the parts played by transport, trade, business organization and urbanization in this revolution. It is hardly necessary to labor the significance of the advance. China’s was beyond any reasonable doubt the most developed economy in the medieval world, and the investigation both of the causes that made this possible and of those that subsequently prevented a take-off into sustained growth is among the most pressing tasks waiting to be accomplished before any general theory of economic development, solidly grounded in comparative historical analysis, becomes possible.
AUTHOR BIOGRAPHY
SHIBA Yoshinobu is Professor Emeritus of Chinese History at Osaka University.
Mark ELVIN is Professor Emeritus of Chinese History at the Australian National University.
REQUEST ACCESSIBLE FILE