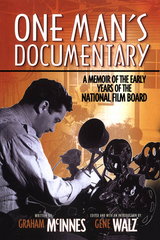 Graham McInnes was one of many talented young people recruited by the charismatic John Grierson to build the National Film Board of Canada during the heady days of WWII. McInnes’s memoir of these “days of high excitement” is an insider’s look at the NFB from 1939 to 1945, a vivid “origin” story of Canada’s emerging world-class film studio that provides the NFB with the kind of full-bodied vitality usually associated with the great Hollywood studios in their golden years.An art critic and CBC radio commentator when he joined the NFB in 1939 as a scriptwriter, McInnes worked on many film classics with filmmakers such as Tom Daly, Norman McLaren, Gudrun Parker, and Budge Crawley. McInnes portrays these legends as well as many other players in that dynamic world, such as Lorne Green, Morley Callaghan, and Mavis Gallant, in this stylish, witty, and affectionate recreation of the early day-to-day frenzy.One Man’s Documentary is a lively account of one of the most exciting periods in Canadian filmmaking. With style and verve, McInnes paints vivid portraits of Grierson and the others who helped make the NFB an international institution. Film historian Gene Walz’s introduction gives a full picture of the early history of the NFB as well as an account of McInnes’s fascinating life.
AUTHOR BIOGRAPHY

Graham McInnes was arts columnist for Saturday Night magazine and a commentator on CBC radio before joining the NFB in 1939. After leaving the NFB in 1945, he joined the foreign service and eventually became Canada's first ambassador to UNESCO. He was the author of two novels and three volumes of memoirs.