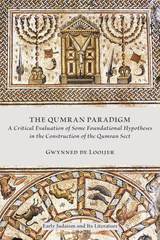 Gwynned de Looijer reexamines the key hypotheses that have driven scholars’ understandings of the Dead Sea Scrolls, the archaeological site of Khirbet Qumran, and the textual descriptions of the Essenes. She demonstrates that foundational hypotheses regarding a sect at Qumran have heavily influenced the way the texts found in the surrounding caves are interpreted. De Looijer’s approach abandon’s those assumptions to illustrate that the Dead Sea Scrolls reflect a wider range of backgrounds reflecting the many diverse forms of Judaism that existed in the Second Temple period.