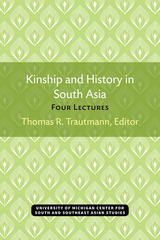 Kinship and History in South Asia presents four papers given at a small conference of kinship studies scholars, “Kinship and History in South Asia,” at the University of Toronto in 1973. They draw upon one another and show several common concerns, particularly the theoretical importance of Dravidian systems. Yey they remain specialist studies, each within its own raison d’être.
Brendra E. F. Beck contributes a study of the “kinship nucleus” in Tamil folklore, Levi-Straussian both in its treatment of kinship and of mythology.
George L. Hart’s study of woman and the sacred in the ancient Tamil literature of the Sangam attempts to elucidate this literature in its own terms, and also to relate it to Beck’s “kinship nucleus.”
Thomas R. Trautmann presents a critical examination of the evidence for cross-cousin marriage in early North India, attempting to determine historical fact from literary materials.
Narendra K. Wagle offers a survey of the kinship categories to be found in the Pali Jatakas.
AUTHOR BIOGRAPHY
Brenda F. Beck is Associate Professor of Anthropology at the University of British Columbia.
George L. Hart is Assistant Professor in the Department of South Asian Studies at the University of Wisconsin.
Thomas R. TRAUTMANN is Ass
TABLE OF CONTENTS
Cover
Title
Copyright
Contents
Preface
The Contributors
The Kin Nucleus in Tamil Folklore
Some Aspects of Kinship in Ancient Tamil Literature
Cross-Cousin Marriage in Ancient North India?
Kinship Groups in the Jātakas
REQUEST ACCESSIBLE FILE