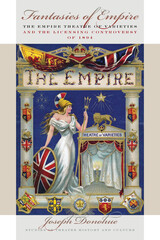 In the London summer of 1894, members of the National Vigilance Society, led by the well-known social reformer Laura Ormiston Chant, confronted the Empire Theatre of Varieties, Leicester Square, and its brilliant manager George Edwardes as he applied for a routine license renewal. On grounds that the Empire's promenade was the nightly resort of prostitutes, that the costumes in the theatre's ballets were grossly indecent, and that the moral health of the nation was imperiled, Chant demanded that the London County Council either deny the theatre its license or require radical changes in the Empire's entertainment and clientele before granting renewal. The resulting license restriction and the tremendous public controversy that ensued raised important issues--social, cultural, intellectual, and moral--still pertinent today.Fantasies of Empire is the first book to recount in full the story of the Empire licensing controversy in all its captivating detail. Contemporaneous accounts are interwoven with Donohue's identification and analysis of the larger issues raised: What the controversy reveals about contemporary sexual and social relations, what light it sheds on opposing views regarding the place of art and entertainment in modern society, and what it says about the pervasive effect of British imperialism on society's behavior in the later years of Queen Victoria's reign. Donohue connects the controversy to one of the most interesting developments in the history of modern theatre, the simultaneous emergence of a more sophisticated, varied, and moneyed audience and a municipal government insistent on its right to control and regulate that audience's social and cultural character and even its moral behavior.Rich in illustrations and entertainingly written, Fantasies of Empire will appeal to theatre, dance, and social historians and to students of popular entertainment, the Victorian period, urban studies, gender studies, leisure studies, and the social history of architecture.
AUTHOR BIOGRAPHY
Joseph Donohue is a theatre historian and professor of English at the University of Massachusetts-Amherst. He is the author of numerous books and articles on British and Irish theatre and drama, including Dramatic Character in the English Romantic Age and Theatre in the Age of Kean. He is editor and part author of The Cambridge History of British Theatre, vol. 2, 1660-1895.
REVIEWS
“Joseph Donohue utilizes the turbulent licensing controversy around the Empire Theatre of Varieties in the mid-1890s to open a detailed and fascinating window into the legal, moral, and social negotiations of morality in Victorian culture. An admirable example of the thick description of a significant historical moment.”--Marvin Carlson, Sidney E. Cohn Distinguished Professor of Theatre, Graduate Center, City University of New York


“Joseph Donohue is the dean of 19th-century theatre historians, and his enviable command of theatrical and social history, his tireless archival sleuthing, and his lively prose style have never been put to better use. Much more than an impressively documented account of the melodramatic battle to shut down a notorious London variety theatre, Fantasies of Empire is a cannily revealing study of the dense interlacings of sex, morality, performance, and politics (both global and local) in fin de siècle Britain.”--Richard Schoch, Queen Mary, University of London