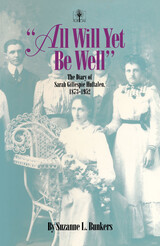 Sarah Gillespie Huftalen led an unconventional life for a rural midwestern woman of her time. Born in 1865 near Manchester, Iowa, she was a farm girl who became a highly regarded country school and college teacher; she married a man older than either of her parents, received a college degree later in life, and was committed to both family and career. A gifted writer, she crafted essays, teacher-training guides, and poetry while continuing to write lengthy, introspective entries in her diary, which spans the years from 1873 to 1952. In addition, she gathered extensive information about the quietly tragic life of her mother, Emily, and worked to preserve Emily's own detailed diary.

In more than 3,500 pages, Sarah writes about her multiple roles as daughter, sister, wife, teacher, family historian, and public figure. Her diary reflects the process by which she was socialized into these roles and her growing consciousness of the ways in which these roles intersected. Not only does her diary embody the diverse strategies used by one woman to chart her life's course and to preserve her life's story for future generations, it also offers ample evidence of the diary as a primary form of private autobiography for individuals whose lives do not lend themselves to traditional definitions of autobiography.

Taken together, Emily's and Sarah's extraordinary diaries span nearly a century and thus form a unique mother/daughter chronicle of daily work and thoughts, interactions with neighbors and friends and colleagues, and the destructive family dynamics that dominated the Gillespies. Sarah's consciousness of the abusive relationship between her mother and father haunts her diary, and this dramatic relationship is duplicated in Sarah's relationship with her brother, Henry, Suzanne Bunkers' skillful editing and analysis of Sarah's diary reveal the legacy of a caring, loving mother reflected in her daughter's work as family member, teacher, and citizen.

The rich entries in Sarah Gillespie Huftalen's diary offer us brilliant insights into the importance of female kinship networks in American life, the valued status of many women as family chroniclers, and the fine art of selecting, piecing, stitching, and quilting that characterizes the many shapes of women's autobiographies. Read Sarah's dairy to discover why "all will yet be well."

Suzanne Bunkers is professor of English at Mankato State University. She is the editor of The Diary of Caroline Seabury, 1834-1863 and the author of "All Will Yet Be Well": The Diary of Sarah Gillespie Huftalen, 1873-1952 (IOWA, 1993).

"I was captivated by Sarah's diary. It allows the reader to enter the world of the nineteenth-century farm child (a rare experience) and to follow that individual's life throughout her middle years and into old age. This is a longitudinal view that historians seldom have the privilege to experience…At times it has a suspenseful quality, compelling the reader to go on and on."—Dorothy Schwieder


"…a valuable descriptive book for women's history regarding mother/daughter relationships, domestic ideology, and abusive families. Sarah is a quintessential diarist, raised to be the journalist of a unique family."—Judy Nolte Lensink

Introduction: The Diary as the Tapestry of Life: 1

Conclusion: The Diary as Cultural Text: 261