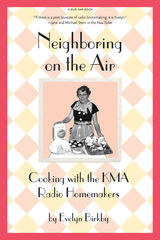 In 1925 Earl May began broadcasting KMA Radio-960 from Shenandoah, Iowa, to boost his fledgling seed business. The station aired practical information designed to help with the day-to-day activity in midwestern farmhouse kitchens. Before long KMA was a trusted friend throughout the wide listening area, offering inspiration, companionship, and all manners of domestic counsel. Hosting the daily radio programs—Home Hour, the Stitch and Chat Club, and the KMA Party Line—and the live cooking demonstrations that drew thousands to the KMA auditorium was a changing roster of personable, lively women who quickly became known as the KMA Radio Homemakers.

Now, in Neighboring on the Air, we can hear the voices of the KMA homemakers and sample their philosophy and—best of all—cooking. Through recipes, biographies, and household advice we get to know such enduring women as "The Little Minister," the Reverend Edythe Stirlen, and Leanna Driftmier and the whole Kitchen-Klatter family, part of the longest-running homemaker program in the history of radio. Learn how to make Sour Cream Apple Pie from "The Farmer's Wife," Florence Falk; Varnished Chicken from the first long-term KMA Radio Homemaker, Jessie Young; and E.E.E. Missouri Dessert (nobody can remember what the "E.E.E." stands for) from the indomitable host of the Edith Hansen Kitchen Club. This endearing scrapbook of people, places, and foods charts the continuing adventure of the KMA homemakers as they broadcast into the 1990s. Neighboring on the Air is an enchanting piece of Americana. Anyone interested in cooking, cultural history, or the Midwest will want to own and use this book.

"If there is an poet laureate of radio homemaking, it is Evelyn."—Jane and Michael Stern in the New Yorker