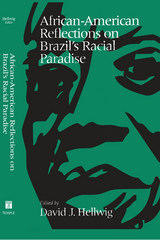 African-American Reflections on Brazil's Racial Paradise
by David Hellwig
Temple University Press, 1992
Cloth: 978-0-87722-892-9
"Hellwig has made a remarkable contribution to the literature and study of comparative race relations."

At the turn of the twentieth century, the popular image of Brazil was that of a tropical utopia for people of color, and it was looked upon as a beacon of hope by African Americans. Reports of this racial paradise were affirmed by notable black observers until the middle of this century, when the myth began to be challenged by North American blacks whose attitudes were influenced by the civil rights movement and burgeoning black militancy. The debate continued and the myth of the racial paradise was eventually rejected as black Americans began to see the contradictions of Brazilian society as well as the dangers for people of color.

David Hellwig has assembled numerous observations of race relations in Brazil from the first decade of the century through the 1980s. Originally published in newspapers and magazines, the selected commentaries are written by a wide range of African-American scholars, journalists, and educators, and are addressed to a general audience.
AUTHOR BIOGRAPHY
David Hellwig is Professor of Interdisciplinary Studies at St. Cloud State University in Minnesota.
REVIEWS
"Hellwig has made a remarkable contribution to the literature and study of comparative race relations."
—Anani Dzidzienyo, Afro-American Studies and Portuguese-Brazilian Studies, Brown University