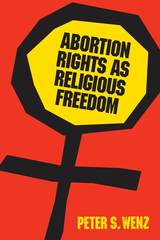 "This excellent books is bound to stir debate on the abortion issue and to occupy a rather distinctive position."

With the current composition of the Supreme Court and recent challenges to Roe v. Wade, Peter S. Wenz's new approach to the ethical, moral, and legal issues related to a woman's right to elective abortion may turn the tide in this debate. He argues that the Supreme Court reached the right decision in Roe v. Wade but for the wrong reasons. Wenz contends that a woman's right to terminated her pregnancy should be based, not on her constitutional right to privacy, but on the constitutional guarantee of religious freedom, a basis for freedom of choice that is not subject to the legal criticisms advanced against Roe. At least up to the 20th week of a pregnancy, one's belief whether a human fetus is a human person or not is a religious decision. He maintains that because questions about the moral status of a fetus are religious, it follows that anti-abortion legislation, to the extent that it is predicated on such "inherently religious beliefs," is unconstitutional.

In this timely and topical book, Wenz also examines related cases that deal with government intervention in an individual's procreative life, the regulation of contraceptives, and other legislation that is either applied to or imposed upon select groups of people (e.g., homosexuals, drug addicts). He builds a concrete argument that could replace Roe v. Wade.

"In this important study of abortion and the Constitiution, legal philosopher Peter Wenz contends that Roe v. Wade was wrongly argued but well conlcuded. Wenz presents a substantial review of Supreme Court decisions on abortion, then critically exposes flaws, including the privacy justification for abortion as well as the trimester scheme.

"This is an original and scholarly exposition of the view that abortion rights fall under the religion clauses of the First Amendment. The view defended is an important alternative to the privacy defense upon which the Roe v. Wade decision was based and should help to expand the ethical and constitutional debate about abortion rights."

1. The Derivation of Roe v. Wade

3. The Evolution of "Religion"

4. The Definition of "Religion"

7. The Regulation of Abortion