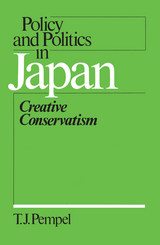 In a comparative framework, Pempel analyzes six major areas of domestic policy-making in Japan--administrative reform, economic policy, labor relations, social welfare, environmental policy, and higher education. Each case is accompanied by selected readings translated from official government documents and the writings of critics of official policy. The book offers an unusually strong point of view, one that is sure to invite debate.

Pemple attempts to unravel the intertwined issues of the autonomy of the Japanese bureaucracy and the strength of the conservative coalition. He describes the weaknesses of opposition politics and labor but goes on to suggest how protest movements can be effective and how change can occur in the face of a powerful conservative consensus. The "economic miracle" of Japan, like the other policy areas, is realistically assessed in the context of events in other industrialized countries.
REQUEST ACCESSIBLE FILE