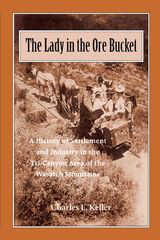 When the first company of Mormon settlers arrived in the Great Salt Lake Valley in July 1847, it was immediately apparent that thier survival depended upon what resources they found in the mountains surrounding them. The Great Basin soil was baked hard by the sun and yielded to the plow with great difficulty. And as pioneer William Clayton noted, surveying the valley floor, "Timber is evidently lacking." But within a week of arrival, a small dam had been constructed to channel irrigation water to crops, parties had been dispatched to explore the nearby canyons for trees suitable for lumber, and names had been attached to several dozen features of the landscape including peaks, creeks, and canyons.

These place names, as well as the physical traces and artifacts that persist in three Wasatch canyons—Mill Creek, Big Cottonwood, and Little Cottonwood—tantalize with what they suggest, but do not tell, about the history of settlement and development in the canyons. Charles Keller has extracted a wealth of information to create The Lady in the Ore Bucket, a fascinating history of the lumber, mining, and hydropower industries built from the rich natural resources of the canyons. With more than six dozen photographs and maps, the book is alive with details concerning the personalities, politics, pacts, and peregrinations of local leaders from white settlement in 1847 through the early 1900s. It will delight any reader with an interest in the magnificent canyons that open onto the modern Wasatch Front.
AUTHOR BIOGRAPHY
Charles Keller is a retired engineer and an avid avocational historian. He lives in Salt Lake City.
REVIEWS
"For those who draw inspiration from the magnificent Wasatch Mountains, this thoroughly researched and richly detailed history is a must. Keller takes us into the heart of the mountains to reveal a history as rich and colorful as any."?—Alan Kent Powell, Utah State Historical Society


"Charles Keller's book is must reading for anyone and everyone interested in the past and the future of the Wasatch Front canyons."—Utah Historical Quarterly


"The title and the picture hint at the wonderful tales that are in store for you. From the Preface to the end, this is a book you can't put down. Charlie's prose flows like a mountain stream."—Save Our Canyons