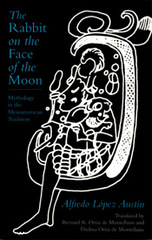 Eighteen essays provide an accessible, entertaining look into a system of millennia-old legends and beliefs.

Mythology is one of the great creations of humankind. It forms the core of sacred books and reflects the deepest preoccupations of human beings, their most intimate secrets, their glories, and their infamies.

In 1990, Alfredo López Austin, one of the foremost scholars of ancient Mesoamerican thought, began a series of essays about mythology in the Mesoamerican tradition, published in México Indígena. Although his articles were written for general readers, they were also intended to engage specialists. They span a divers subject matter: myths and names, eclipses, stars, left and right, Méxican origins, Aztec incantations, animals, and the incorporation of Christian elements into the living mythologies of Mexico. The title essay relates the Mesoamerican myth explaining why there is a rabbit o the moon’s face to a Buddhist image and suggests the importance of the profound mythical concepts presented by each image.

The eighteen essays in this volume are unified by their basis in Mesoamerican tradition and provide an accessible, entertaining look into a system of millennia-old legends and beliefs.