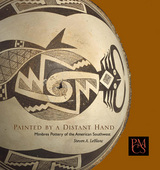 Painted by a Distant Hand: Mimbres Pottery from the American Southwest
by Steven A. LeBlanc
foreword by Rubie Watson
photographs by Hillel S. Burger

Harvard University Press, 2005
Paper: 978-0-87365-402-9
Highlighting one of the Peabody Museum's most important archaeological expeditions—the excavation of the Swarts Ranch Ruin in southwestern New Mexico by Harriet and Burton Cosgrove in the mid-1920s—Steven LeBlanc's book features rare, never-before-published examples of Mimbres painted pottery, considered by many scholars to be the most unique of all the ancient art traditions of North America. Made between A.D. 1000 and 1150, these pottery bowls and jars depict birds, fish, insects, and mammals that the Mimbres encountered in their daily lives, portray mythical beings, and show humans participating in both ritual and everyday activities. LeBlanc traces the origins of the Mimbres people and what became of them, and he explores our present understanding of what the images mean and what scholars have learned about the Mimbres people in the 75 years since the Cosgroves' expedition.
REVIEWS
Steven LeBlanc has compiled a very nice, easily comprehended guide for the lay reader that enhances one's knowledge and appreciation of the Mimbres pottery and culture. The book contains several sections that provide an introduction to the Mimbres area and culture, including a background for the Swarts Ruin collection, a brief history of the Mimbres people, and a perspective of their daily life.
-- Harry Shafer Journal of Anthropological Research


Stephen LeBlanc's Painted by a Distant Hand is a slim but informative volume inspired by a two-year-long exhibit of Mimbres (A.D. 200-1100) pottery at Harvard's Peabody Museum...LeBlanc discusses the meaning of the pottery's figurative imagery and abstract patterns, the artists who created them (most likely women), and what they indicate about daily life, all in clear, straightforward prose.
-- Archaeology