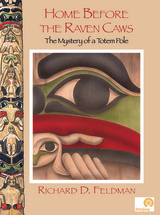 In 1903 Alaska governor John Brady collected fifteen old totem poles for preservation at Stika National Historical Park, creating one of the most famous collections of totem poles in the world. One pole became separated, and its fate remained a mystery for nearly ninety years. This revised edition of Home before the Raven Caws unravels the mystery of that missing pole from the Brady collection. The old Alaskan pole found its way to Indiana over a hundred years ago. A new version of the pole stands today at the Eiteljorg Museum of American Indians and Western Art in Indianapolis. The first portion of the book serves as a general primer of the history and cultural significance, identification, carving, and raising of totem poles.
AUTHOR BIOGRAPHY
Richard D. Feldman, MD, is a family physician who has a longtime interest in Native American religion, art, and culture, having studied with the renowned scholar Joseph Epes Brown at Indiana University, Bloomington. He was adopted into the Haida nation in 1996.
TABLE OF CONTENTS
Contents
Preface
Acknowledgments
What is a Totem Pole?
Shared Symbols
Types of Totem Poles
Carving a Totem Pole
Raising a Totem Pole
The Mysterious Golden Hill Totem Pole
Solving the Mystery
Indiana’s Alaskan Totem Pole Reborn
The Changing Appearance of the Golden Hill Totem Pole
The Myth Told by the Golden Hill Totem Pole
Epilogue