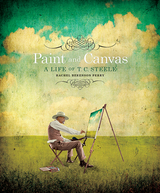 At the age of fourteen, a young man in Waveland, Indiana, had taken over the family farm after the death of his father. Now responsible for taking care of his widowed mother and supporting his four brothers, he took up the reins on the plow to begin preparing the field for planting. Family legend has it that the young farmer, Theodore Clement Steele, tied “colored ribbons to the handles of the plow so that he could watch the ribbons in the wind and the effect that they had on the [surrounding] colors.” Recognizing Steele’s passion for art, his mother supported his choice to make his living as an artist. T. C. Steele, the eighth volume in the Indiana Historical Society Press’s youth biography series, traces the path of Steele’s career as an artist from his early studies in Germany to his determination to paint what he knew best, the Indiana landscape. Steele, along with fellow artists William Forsyth, Otto Stark, Richard Gruelle, and J. Ottis Adams, became a member of the renowned Hoosier Group and became a leader in the development of Midwestern art.
AUTHOR BIOGRAPHY
RACHEL BERENSON PERRY is the former fine arts curator at the Indiana State Museum. In addition to organizing art exhibitions at the ISM, she is the author of numerous articles and books, including Children from the Hills: The Life and Work of Ada Walter Shulz (1998) and T. C. Steele and the Society of Western Artists 1896–1914 (2009).
TABLE OF CONTENTS
Contents
Acknowledgments
Foreword
Chapter 1. Munich, Germany, 1880–1885
Chapter 2. Growing Up in Indiana, 1847–1880
Chapter 3. Returning to Indiana: The Hoosier Group, 1885–1897
Chapter 4. Painting in Brookville and Traveling West, 1898–1906
Chapter 5. Building a Home in Brown County, 1907–1915
Chapter 6. Studios in Brown County and Indiana University, 1916–1926
T. C. Steele Historic Sites
Learn More about T. C. Steele
Index
Gallery