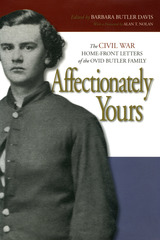 In the American Civil War missives from relatives to soldiers relating the details of what was occurring in the villages and towns unscarred by the conflict were rare. Edited by Barbara Butler Davis, Affectionately Yours: The Civil War Home-Front Letters of the Ovid Butler Family includes transcriptions of sixty-five holograph letters written from 1863 to 1865 to their son Scot. The letters are housed in the collection of the Irvington Historical Society and relate a fascinating social history of the Indianapolis community during the Civil War. The book also includes a foreword by Civil War historian Alan T. Nolan.
AUTHOR BIOGRAPHY
Barbara Butler Davis, the great-great-granddaughter of Ovid Butler, teaches Spanish in the Chicago area. She studies Indiana Civil War history and serves Butler University as an alumni recruiter and sponsor.
TABLE OF CONTENTS