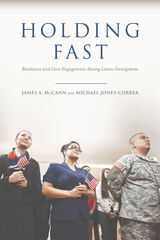 The fight over immigration reform and immigrants’ rights in the U.S. has been marked by sharp swings in both public sentiment and official enforcement. In 2006, millions of Latino immigrants joined protests for immigration reform. Deferred Action for Childhood Arrivals, a policy granting work permits and protection from deportation to undocumented immigrants who entered the country before age 16, was enacted in 2012, despite a sharp increase in deportations during the Bush and Obama administrations. The 2016 election of Donald J. Trump prompted a surge in anti-immigrant sentiment which threatened DACA and other progressive immigration policies. In Holding Fast, political scientists James McCann and Michael Jones-Correa investigate whether and how these recent shifts have affected political attitudes and civic participation among Latino immigrants.
​
Holding Fast draws largely from a yearlong survey of Latino immigrants, including both citizens and noncitizens, conducted before and after the 2016 election. The survey gauges immigrants’ attitudes about the direction of the country and the emotional underpinnings of their political involvement. While survey respondents expressed pessimism about the direction of the United States following the 2016 election, there was no evidence of their withdrawal from civic life. Instead, immigrants demonstrated remarkable resilience in their political engagement, and their ties to America remained robust.

McCann and Jones-Correa examine Latino immigrants’ trust in government as well as their economic concerns and fears surrounding possible deportations of family members and friends. They find that Latino immigrants who were concerned about the likelihood of deportation were more likely to express a lack of trust in government. Concerns about personal finances were less salient. Disenchantment with the U.S. government did not differ based on citizenship status, length of stay in America, or residence in immigrant-friendly states. Foreign-born Latinos who are naturalized citizens shared similar sentiments to those with fewer political rights, and immigrants in California, for example, express views similar to those in Texas.

Addressing the potential influence immigrant voters may wield in in the coming election, the authors point to signs that the turnout rate for naturalized Latino immigrant may be higher than that for Latinos born in the United States.  The authors further underscore the importance of the parties' platforms and policies, noting the still-tenuous nature of Latino immigrants’ affiliations with the Democratic Party.

Holding Fast outlines the complex political situation in which Latino immigrants find themselves today. Despite well-founded feelings of anger, fear, and skepticism, in general they maintain an abiding faith in the promise of American democracy. This book provides a comprehensive account of Latino immigrants’ political opinions and a nuanced, thoughtful outlook on the future of Latino civic participation. It will be an important contribution to scholarly work on civic engagement and immigrant integration.
AUTHOR BIOGRAPHY
James A. McCann is Professor of Political Science at Purdue University.

Michael Jones-Correa is the President’s Distinguished Professor of Political Science at the University of Pennsylvania.

REVIEWS
“We have long puzzled over the net effect of anti-immigrant hostility on the levels of civic and social engagement.  Using this era of—by any measure—extreme anti-immigrant policy action by the Trump administration, James A. McCann and Michael Jones-Correa offer us a heartening answer and one consistent with the life narratives of the individuals involved.  Challenged, excluded, and harassed, immigrants to the United States have opted for fuller engagement with our political system in an act of civic affirmation that is rooted in the finest traditions of American democracy, and consistent with the characters of individuals who chose to struggle past adversity to secure better futures for themselves and their progeny. These two nodal scholars have, once again, provided documentary evidence of the civic ideals of new Americans.”


“Holding Fast is a critical read to understand how Latino immigrants have fared—and in fact remained resilient—under the Trump administration. Even in the face of a slew of anti-immigrant actions, James A. McCann and Michael Jones-Correa make it clear that Latino immigrants remain engaged and are using their voices to speak out and create change. As we head toward the presidential election, the book makes clear the promise and peril for both political parties of failing to truly engage the Latino community.”


“In recent years, immigrants from Latin America have been the target of vitriolic political discourse and federal policies restricting their participation in American life. But, as James A. McCann and Michael Jones-Correa show, these trends have not led to an exit from U.S. civic life nor a withdrawal from U.S. society. To the contrary, efforts to draw these immigrants outside the American circle have only strengthened their resolve. Based on an impressive study, Holding Fast powerfully underscores the growing importance of Latino immigrants in American politics and civic life. Engaging and persuasively argued, this book is essential reading for anyone interested in how Latino immigrants are actively forging their place in America’s future. If you pick up any book this year, read this one.”

TABLE OF CONTENTS
Contents
List of Illustrations
About the Authors
Acknowledgments
1. Introduction: An Emerging Bipartisan Consensus on Immigration Is Disrupted
2. Living Civic Life on the Edge: The Effects of Disappointment and Vulnerability on Immigrant Political Incorporation
3. The Effect of Civic Stress on Faith in American Government: Less Tint in the Rose-Colored Glasses?
4. Immigrant Attachments to American Society: Holding Fast?
5. Raising Voices in Response to Civic Stress: How Many Decibels?
6. Conclusion: Will Immigrant Voices Be Heard?
Appendix: Surveying Immigrants: An Overview of the Latino Immigrant National Election Studies
Notes
References
Index