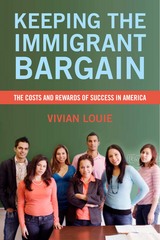 Most nineteenth and early-twentieth-century European immigrants arrived in the United States with barely more than the clothes on their backs. They performed menial jobs, spoke little English, and often faced a hostile reception. But two or more generations later, the overwhelming majority of their descendants had successfully integrated into American society. Today's immigrants face many of the same challenges, but some experts worry that their integration, especially among Latinos, will not be as successful as their European counterparts. Keeping the Immigrant Bargain examines the journey of Dominican and Colombian newcomers whose children have achieved academic success one generation after the arrival of their parents. Sociologist Vivian Louie provides a much-needed comparison of how both parents and children understand the immigrant journey toward education, mobility, and assimilation. Based on Louie's own survey and interview study, Keeping the Immigrant Bargain examines the lives of thirty-seven foreign-born Dominican and Colombian parents and their seventy-six young adult offspring—the majority of whom were enrolled in or had graduated from college. The book shows how they are adapting to American schools, jobs, neighborhoods, and culture. Louie discovers that before coming to the United States, some of these parents had already achieved higher levels of education than the average foreign-born Dominican or Colombian, and after arrival many owned their own homes. Significantly, most parents in each group expressed optimism about their potential to succeed in the United States, while also expressing pessimism about whether they would ever be accepted as Americans. In contrast to the social exclusion experienced by their parents, most of the young adults had assimilated linguistically and believed themselves to be full participants in American society. Keeping the Immigrant Bargain shows that the offspring of these largely working-class immigrants had several factors in common that aided their mobility. Their parents were highly engaged in their lives and educational progress, although not always in ways expected by schools or their children, and the children possessed a strong degree of self-motivation. Equally important was the availability of key institutional networks of support, including teachers, peers, afterschool and other enrichment programs, and informal mentors outside of the classroom. These institutional networks gave the children the guidance they needed to succeed in school, offering information the parents often did not know themselves. While not all immigrants achieve such rapid success, this engrossing study shows how powerful the combination of self-motivation, engaged families, and strong institutional support can be. Keeping the Immigrant Bargain makes the case that institutional relationships—such as teachers and principals who are trained to accommodate cultural difference and community organizations that help parents and children learn how to navigate the system—can bear significantly on immigrant educational success.
AUTHOR BIOGRAPHY
VIVIAN LOUIE is associate professor of education at the Graduate School of Education, Harvard University.
TABLE OF CONTENTS
Contents
About the Author
Acknowledgments
1. Introduction
2. In Two Worlds: The Immigrant American Dream
3. Being an Immigrant: Alone in America
4. Children on Their Own in School
5. Beyond the Family: Constellations of Support
6. How the Bargain Was Won: Higher Education and Mobility
7. Assimilation Procesess: Who We Are
8. Conclusion: Institutions and Individual Agency
Appendix: Methodological Notes
Notes
References
Index