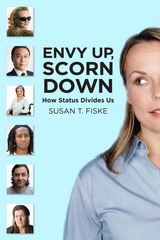 An insightful examination of why we compare ourselves to those above and below us. The United States was founded on the principle of equal opportunity for all, and this ethos continues to inform the nation's collective identity. In reality, however, absolute equality is elusive. The gap between rich and poor has widened in recent decades, and the United States has the highest level of economic inequality of any developed country. Social class and other differences in status reverberate throughout American life, and prejudice based on another's perceived status persists among individuals and groups. In Envy Up, Scorn Down, noted social psychologist Susan Fiske examines the psychological underpinnings of interpersonal and intergroup comparisons, exploring why we compare ourselves to those both above and below us and analyzing the social consequences of such comparisons in day-to-day life. What motivates individuals, groups, and cultures to envy the status of some and scorn the status of others? Who experiences envy and scorn most? Envy Up, Scorn Down marshals a wealth of recent psychological studies as well as findings based on years of Fiske's own research to address such questions. She shows that both envy and scorn have distinctive biological, emotional, cognitive, and behavioral characteristics. And though we are all "wired" for comparison, some individuals are more vulnerable to these motives than others. Dominant personalities, for example, express envy toward high-status groups such as the wealthy and well-educated, and insecurity can lead others to scorn those perceived to have lower status, such as women, minorities, or the disabled. Fiske shows that one's race or ethnicity, gender, and education all correlate with perceived status. Regardless of whether one is accorded higher or lower status, however, all groups rank their members, and all societies rank the various groups within them. We rate each group as either friend or foe, able or unable, and accordingly assign them the traits of warmth or competence. The majority of groups in the United States are ranked either warm or competent but not both, with extreme exceptions: the homeless or the very poor are considered neither warm nor competent. Societies across the globe view older people as warm but incompetent. Conversely, the very rich are generally considered cold but highly competent. Envy Up, Scorn Down explores the nuances of status hierarchies and their consequences and shows that such prejudice in its most virulent form dehumanizes and can lead to devastating outcomes—from the scornful neglect of the homeless to the envious anger historically directed at Tutsis in Rwanda or Jews in Europe. Individuals, groups, and even cultures will always make comparisons between and among themselves. Envy Up, Scorn Down is an accessible and insightful examination of drives we all share and the prejudice that can accompany comparison. The book deftly shows that understanding envy and scorn—and seeking to mitigate their effects—can prove invaluable to our lives, our relationships, and our society.
AUTHOR BIOGRAPHY
SUSAN T. FISKE is Eugene Higgins Professor of Psychology at Princeton University.
TABLE OF CONTENTS
Title Page
Copyright
Contents
About the Author
Preface
1. Comparing Ourselves to Others: Envy and Scorn Divide Us
2. Signatures of Envy and Scorn: We Know Them When We See Them
3. Who Cares About Comparisons?
4 Why Do We Compare? Comparison Informs Us
5. Why Do We Compare? Comparison Protects Us
6. Why Do We Compare? Comparison Helps Us Fit into Our Groups
7. Beyond Comparison: Transforming Envy and Scorm
Notes
References
Index