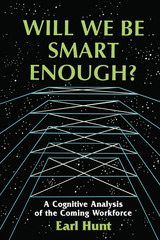 The American workforce and the American workplace are rapidly changing—in ways that make them increasingly incompatible. Advances in automation and telecommunications have eliminated many jobs based on routine tasks and muscle power and fueled the demand for employees who can understand and apply new technologies. But, as Earl Hunt convincingly demonstrates in Will We Be Smart Enough?, such "smart" employees will be in dangerously short supply unless fundamental changes are made to our educational and vocational systems. Will We Be Smart Enough? combines cognitive theory, demographic projections, and psychometric research to measure the capabilities of tomorrow's workforce against the needs of tomorrow's workplace. Characterized by sophisticated machinery, instant global communication, and continuous reorganization, the workplace will call for people to fuse multiple responsibilities, adapt quickly to new trends, and take a creative approach to problem solving. Will Americans be able to meet the difficult and unprecedented challenges brought about by these innovations? Hunt examines data from demographic sources and a broad array of intelligence tests, whose fairness and validity he judiciously assesses. He shows that the U.S. labor force will be increasingly populated by older workers, who frequently lack the cognitive flexibility required by rapid change, and by racial and ethnic minorities, who have so far not fully benefitted from the nation's schools to develop the cognitive skills necessary in a technologically advanced workplace. At the heart of Will We Be Smart Enough? lies the premise that this forecast can be altered, and that cognitive skills can be widely and successfully taught. Hunt applies psychological principles of learning and cognitive science to a variety of experimental teaching programs, and shows how the information revolution, which has created such rapid change in the workplace, can also be used to transform the educational process and nurture the skills that the workplace of the future will require. Will We Be Smart Enough? answers naysayers who pronounce so many people "cognitively disadvantaged" by suggesting that new forms of education can provide workers with enhanced skills and productive employment in the twenty-first century.   "Hunt's book provides succinct, lucid presentations of our best scientific understandings of thinking, intelligence, job performance, and how to measure them. Only by comprehending and applying these understandings to develop sound educational and instructional strategies can we create a capable workforce for the digital age." —John T. Bruer, President, James S. McDonnell Foundation< "Earl Hunt applies keys insights from cognitive psychology and from the psychology of measurement to issues of workers and the workplace. His book constitutes a valuable contribution to, and synthesis of, an important area of study. "—Howard Gardner, Harvard Project Zero   Will We Be Smart Enough? and The Bell Curve Controversy What about [The Bell Curve by Herrnstein and Murray] caused The New York Times to refer to it as the most controversial book of 1994, and to Murray as the most dangerous conservative in America? The answer is that they took an extreme position on a number of controversial issues [regarding intelligence and genetics]....My conclusion is that we have to do something to increase the amount of cognitive skills in the coming workforce and that, in many cases, we know what to do. Herrnstein and Murray claim that nothing can be done. I disagree....When it comes to improving the cognitive skills of the workforce, this is an area where everyone, whites and blacks, Latinos and Anglos, government programs and private enterprise, has got to get their act togeth
AUTHOR BIOGRAPHY
EARL HUNT is professor of psychology and adjunct professor of computer science at the University of Washington.
TABLE OF CONTENTS
Contents
Preface and Acknowledgments
Chapter 1. Thinking and the Workforce
Chapter 2. The Psychological Measurement of Workforce Productivity
Chapter 3. Psychometric Scores and Workplace Performance
Chapter 4. A Psychometric View of the Future Workforce
Chapter 5. The Cognitive Psychology View of Thinking
Chapter 6. Cognitive Demands of the Coming Workplace
Chapter 7. Anticipating the Future
Afterword: The Bell Curve Controversy
References
Index