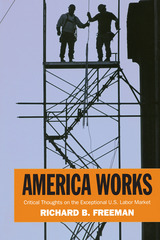 The U.S. labor market is the most laissez faire of any developed nation, with a weak social safety net and little government regulation compared to Europe or Japan. Some economists point to this hands-off approach as the source of America's low unemployment and high per-capita income. But the stagnant living standards and rising economic insecurity many Americans now face take some of the luster off the U.S. model. In America Works, noted economist Richard Freeman reveals how U.S. policies have created a labor market remarkable both for its dynamism and its disparities. America Works takes readers on a grand tour of America's exceptional labor market, comparing the economic institutions and performance of the United States to the economies of Europe and other wealthy countries. The U.S. economy has an impressive track record when it comes to job creation and productivity growth, but it isn't so good at reducing poverty or raising the wages of the average worker. Despite huge gains in productivity, most Americans are hardly better off than they were a generation ago. The median wage is actually lower now than in the early 1970s, and the poverty rate in 2005 was higher than in 1969. So why have the benefits of productivity growth been distributed so unevenly? One reason is that unions have been steadily declining in membership. In Europe, labor laws extend collective bargaining settlements to non-unionized firms. Because wage agreements in America only apply to firms where workers are unionized, American managers have discouraged unionization drives more aggressively. In addition, globalization and immigration have placed growing competitive pressure on American workers. And boards of directors appointed by CEOs have raised executive pay to astronomical levels. Freeman addresses these problems with a variety of proposals designed to maintain the vigor of the U.S. economy while spreading more of its benefits to working Americans. To maintain America's global competitive edge, Freeman calls for increased R&D spending and financial incentives for students pursuing graduate studies in science and engineering. To improve corporate governance, he advocates licensing individuals who serve on corporate boards. Freeman also makes the case for fostering worker associations outside of the confines of traditional unions and for establishing a federal agency to promote profit-sharing and employee ownership. Assessing the performance of the U.S. job market in light of other developed countries' recent history highlights the strengths and weaknesses of the free market model. Written with authoritative knowledge and incisive wit, America Works provides a compelling plan for how we can make markets work better for all Americans. A Volume in the Russell Sage Foundation's Centennial Series
AUTHOR BIOGRAPHY
RICHARD B. FREEMAN is Herbert S. Ascherman Professor of Economics at Harvard University.
TABLE OF CONTENTS


Contents Introduction 1. The US Market-Driven Labor System 2. When Markets Drive Outcomes 3. Distribution Matters 4. Why Americans Work and Work 5. Where have the unions gone ... long time passing? 6. Regulating the Unregulated market 7. Management in the Drivers Seat 8. The Great Doubling: Is your job going to Bombay or Beijing? 9. Helping the Invisible Hand