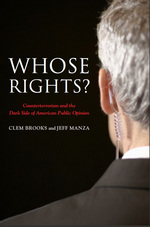 In the wake of the September 11 attacks, the U.S. government adopted a series of counterterrorism policies that radically altered the prevailing balance between civil liberties and security. These changes allowed for warrantless domestic surveillance, military commissions at Guantanamo Bay and even extralegal assassinations. Now, more than a decade after 9/11, these sharply contested measures appear poised to become lasting features of American government. What do Americans think about these policies? Where do they draw the line on what the government is allowed to do in the name of fighting terrorism? Drawing from a wealth of survey and experimental data, Whose Rights? explores the underlying sources of public attitudes toward the war on terror in a more detailed and comprehensive manner than has ever been attempted. In an analysis that deftly deploys the tools of political science and psychology, Whose Rights? addresses a vexing puzzle: Why does the counterterrorism agenda persist even as 9/11 recedes in time and the threat from Al Qaeda wanes? Authors Clem Brooks and Jeff Manza provocatively argue that American opinion, despite traditionally showing strong support for civil liberties, exhibits a “dark side” that tolerates illiberal policies in the face of a threat. Surveillance of American citizens, heightened airport security, the Patriot Act and targeted assassinations enjoy broad support among Americans, and these preferences have remained largely stable over the past decade. There are, however, important variations: Waterboarding and torture receive notably low levels of support, and counterterrorism activities sanctioned by formal legislation, as opposed to covert operations, tend to draw more favor. To better evaluate these trends, Whose Rights? examines the concept of “threat-priming” and finds that getting people to think about the specter of terrorism bolsters anew their willingness to support coercive measures. A series of experimental surveys also yields fascinating insight into the impact of national identity cues. When respondents are primed to think that American citizens would be targeted by harsh counterterrorism policies, support declines significantly. On the other hand, groups such as Muslims, foreigners, and people of Middle Eastern background elicit particularly negative attitudes and increase support for counterterrorism measures. Under the right conditions, Brooks and Manza show, American support for counterterrorism activities can be propelled upward by simple reminders of past terrorism plots and communication about disliked external groups. Whose Rights? convincingly argues that mass opinion plays a central role in the politics of contemporary counterterrorism policy. With their clarity and compelling evidence, Brooks and Manza offer much-needed insight into the policy responses to the defining conflict of our age and the psychological impact of terrorism.
AUTHOR BIOGRAPHY
CLEM BROOKS is professor of sociology at Indiana University, Bloomington. JEFF MANZA is professor of sociology at New York University.
TABLE OF CONTENTS
Contents
Figures and Tables
About the Authors
Preface
Acknowledgments
Introduction
1. From Rights Revolution to War on Terror
2. The Puzzle of Counterterrorism Policy Attitudes
3. A Critical Era?
4. Threat Priming and National Identity Targets
5. Who Is “Us”?
6. Policy Feedback?
Conclusion
Notes
References
Index