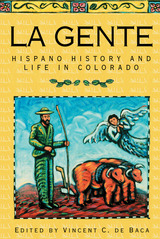 La Gente: Hispano History and Life in Colorado
edited by Vincent C. De Baca
University Press of Colorado, 1998
Paper: 978-0-87081-538-6
Informative and provocative, La Gente: Hispano History and Life in Colorado collects eleven essays by a cross-section of Colorado scholars and writers. The book opens with an examination of Spanish-Mexican exploration, conquest, and settlement of the Colorado region. Moving from exploration to biographical sketches, the book profiles the enigmatic Teresita Sandoval, cofounder of Pueblo; provides the turn-of-the-century memoir of vaquero Elfido Lopez; and offers a bilingual version of the autobiography of Pablo Cabeza de Baca, who recalls the values of his youth and his days at Denver's Sacred Heart College, the precursor of Regis University.

Several essays address the employment patterns of the early part of this century, when desperate native-born Hispanos and Mexican immigrants competed by the thousands for jobs at mining and agricultural corporations throughout Colorado. Four essays study particular expressions of this conflict, including the infamous Ludlow coal strike of 1913-1914; Colorado's sugar beet industry, where Mexican immigrants faced constant discrimination; the growth of the state's sugar industry, the collapse of which devastated Mexicans (the preferred labor force in the field); and a New Deal-era experiment in which laid-off miners were trained to weave Río Grande-style blankets, in the process revitalizing a dying folk art.

Finally, four essays encompass the recent political and cultural rebirth of Hispanos, including a study of the origins of the Crusade for Justice, Denver's leading Chicano rights organization of the 1960s, which - based on declassified FBI documents - proves that government agencies tried to suppress the Crusade and its popular leader, Corky Gonzales.