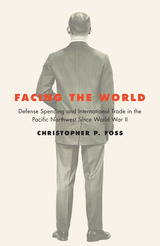 Before the Second World War, the states of Washington and Oregon were thinly populated economic backwaters of the United States. Even the major cities of Portland and Seattle were dependent on agricultural industries, especially timber, for their economic health. That all changed during World War II and the Cold War.

By the dawn of the twenty-first century, the Pacific Northwest boasted a more diversified economy. Beer, tourism, and high tech moved in alongside timber and wheat as the region’s mainstay industries. In Washington, especially, a Cold War–driven military and national security state set up shop as an economic behemoth even as debates over the costs and consequences of the new Atomic Age raged.

Facing the World highlights these changes, as well as the politicians, business leaders, and ordinary people who helped bring them about. At the center of the story, Senators Henry Jackson, Wayne Morse, Slade Gorton, and Mark Hatfield; Congressman Tom Foley; and Governor Vic Atiyeh worked diligently for a generation to transform the region from insular and backward to cosmopolitan and forward-looking. Aligning the region with national security and international trade policies, these politicians made the Pacific Northwest economy what it is today.

Through extensive research in congressional and federal archives, historian Christopher P. Foss vividly brings to life the discussions, conflicts, and controversies that shaped this political era. Though it wasn’t perfect, its fading legacy of leadership is a lesson for our own time. Facing the World will prove a valuable resource to historians, political scientists, and civic-minded residents of the Pacific Northwest.
AUTHOR BIOGRAPHY
Chris Foss is an adjunct faculty member in the history department at Washington State University Vancouver, where he teaches Pacific Northwest history as well as courses on the US survey, civil rights, immigration, and the Cold War. Chris received his PhD in US foreign relations from the University of Colorado Boulder, and has since then also taught at the University of Portland and Willamette University.