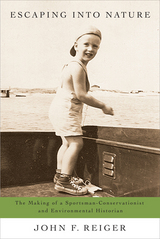 “It was only by escaping into nature that I could obtain the peace and harmony I sought.” —from the Introduction

In Escaping into Nature, prominent wildlife conservationist and environmental historian John Reiger shares his story of an angler and hunter who found a cause and a calling and combined them for his life’s work.

John Reiger’s outdoor adventures as a young man primed him for the teachings of the great sportsmen-conservationists of the past, particularly George Bird Grinnell, Theodore Roosevelt, and Aldo Leopold. Inspired by these conservation giants, Reiger left the security of a tenured professorship to serve as executive director of the Connecticut Audubon Society where he, sometimes controversially, put his ideals into practice. Later, he resumed his academic career to illuminate the lives of early wildlife conservationists, visionaries who continue to inspire us to care deeply about the future of the natural world.

Abused psychologically within his family in his early years, Reiger found solace in nature. Though he first entered the outdoors as an escape from his unpleasant circumstances, he soon found the study and pursuit of insects, fishes, and birds to be exciting ends in themselves. He came to believe that it was only by participating in the life and death of other creatures that one could learn to truly value the natural world, be a part of it, and be inspired to work for its conservation.

John Reiger’s autobiography is also the story of his own developing fascination with America’s past, especially as it relates to human interaction with the natural world; his desire to share that passion with others; and his experiences on the road to becoming a nationally recognized scholar. The twists and turns of that journey, and his accounts of the people—and of the wild creatures—who helped him along the way, will appeal to history enthusiasts and nature lovers alike.
AUTHOR BIOGRAPHY
John F. Reiger is Professor of History at Ohio University-Chillicothe and the former Executive Director of the Connecticut Audubon Society. His other books include The Passing of the Great West: Selected Papers of George Bird Grinnell and "Gifford Pinchot with Rod and Reel"/"Trading Places: From Historian to Environmental Activist"—Two Essays in Conservation History.
REVIEWS
“It was only by escaping into nature that I could obtain the peace and harmony I sought.” —from the Introduction