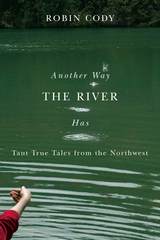 Another Way the River Has collects Robin Cody’s finest nonfiction writings, many appearing for the first time in print. Cody’s prose rings with a sense of place. He is a native speaker who probes the streams and woods and salmon that run to the heart of what it means to live and love, to work and play, in Oregon.

His characters—from loggers to fishers to cowboys to the kids on his school bus—are smart and curious, often off-beat, always vivid. Cody brings the ear of a novelist and the eye of a reporter to the people and places that make the Northwest, and Northwest literature, distinctive.

“A rock, you know, will sink like a stone in water. But a flat rock, slung spinningly near the water surface and at an angel parallel to it, will go skipping across the water in defiance of gravity and common sense. How cool is that?! The first time a boy pulls this off ranks just short of first-time sex on the scale of things he will want to do over and over whenever he can and as long as he lives.”

-from “The Clackamas River”

AUTHOR BIOGRAPHY
Robin Cody, an Oregon native, is the author of Ricochet River and Voyage of a Summer Sun, both of which appear on the Oregon State Library’s 2009 “150 Oregon Books for the Oregon Sesquicentennial.” Voyage of a Summer Sun received a PNBA Book Award and an Oregon Book Award. Cody has worked as an English teacher, a dean of admissions, a baseball umpire, and a school bus driver. He lives in Portland.
TABLE OF CONTENTS
Contents
A Note (by Brian Doyle)
The Clackamas River
Cutting It Close
The Turtle
River City
The Animals Changed
Let ’Er Buck
Deaf Basketball
Hideaway Slough
Miss Ivory Broom
Killed in the Woods
Another Way the River Has
Surf Savvy
A Stranger in Town
Driving Tunnel
The Magruders of Clatskanie
Birdman in the City, 1987
Further and Beyond: Ken Kesey, 1936-2001
Battle
One More Word Outta You and . . . You’re Gone!
Steelhead: A Mystery
If Salmon Were Truth
Emotionally Disturbed
The Swimmers and the Walk-Uprights
Got a Call
Note