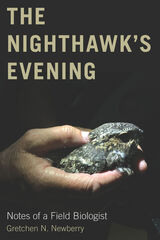 In her late thirties, Gretchen Newberry left her office job in Portland, Oregon, to become a wildlife biologist studying nighthawks. The common nighthawk, Chordeiles minor, has long fascinated birders, scientists, farmers, and anyone who has awoken to its raspy calls on a hot city night. In The Nighthawk’s Evening, Newberry charts her journey across North America to study these birds, from the islands of British Columbia to rooftops in South Dakota, Oregon sagebrush, and Wisconsin forests.

This acrobatic, night-flying bird nests on rooftops and flocks in the thousands as it migrates from Alaska to Argentina and back every year. Nighthawks are strange animals, reptiles with feathers, sleepy during the day, but quick, agile, and especially adept at survival. They have the ability to withstand extreme temperatures and adapt to many habitats, but they are struggling for survival in the Anthropocene.