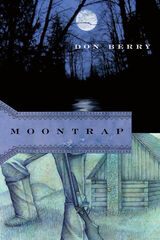 Winner of the Western Writers of America Spur Award for best historical novel, Moontrap is a book of remarkable beauty and power about a man caught between his vivid past and an uncertain future.

The year is 1850, a transitional period in the new Oregon Territory, with settlers and lawmakers working to subdue the untamed region. Johnson Monday, a former mountain man, has been living on a bend of the Willamette River near Oregon City for seven years with his Shoshone Indian wife, struggling to make a place in settled society. One day, Webster T. Webster, a raucous, unrepentant trapper, arrives for an unexpected visit. With his earthy humor and stubborn adherence to the simple life, "Webb" leads Monday through adventures that flirt dangerously close to lawlessness, while helping him to rediscover his moral center. Through defiance, triumph, and tragedy, Moontrap follows Johnson Monday as he realizes that relinquishing the stark honesty of mountain life for the compromises of civilization may be too high a price to pay.