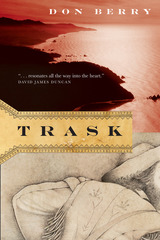 Set in 1848 on the wild edge of the continent, in the rainforests and rugged headlands of the Oregon coast, Trask follows a mountain man's quest for new opportunities and new land to settle. Elbridge Trask is a restless man, a gambler with God, nature, and life itself. Yearning for change, he sets out with Wakila, a young Clatsop Indian, and Charley Kehwa, a tamanawis man or spiritual leader of the tribe, on an extraordinary journey of discovery.

Trask is at once a gripping tale of adventure and a portrayal of one man's return to the naked simplicity of life. Inspired by his belief in the transcendent power of nature, his fascination with Eastern philosophy, and the lives of historical men and women, Don Berry created a story that is strongly imagined and powerfully rendered-a landmark work. This new edition of Berry's celebrated first novel includes an introduction by Jeff Baker, book critic for The Oregonian.
AUTHOR BIOGRAPHY
Don Berry (1932–2001) considered himself a native Oregonian, despite the fact that he was born in Minnesota, with a lineage from Fox Indians. After attending Reed College, where his housemates included poet Gary Snyder, who shared his interest in Eastern metaphysics, Berry began a lifetime of pursuing his many passions: playing down-home blues and composing synthesizer music, sumi drawing and painting, sculpting in bronze, exploring theoretical mathematics, and writing for prize-winning films.
TABLE OF CONTENTS
Title Page
Introduction
Trask