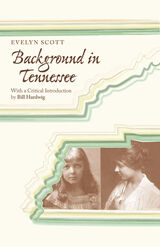 Born Elsie Dunn in 1893 Clarksville, Tennessee, Evelyn Scott lived a tumultuous life that took her to New York, Brazil, western Europe, and the Caribbean. She published twelve novels during her lifetime and was a notable literary figure in the 1920s and 1930s. Published in 1937 alongside her penultimate novel, Background in Tennessee is an autobiographical work devoted to Scott’s Tennessee birthplace, her family’s history, and her broad view of Southern history. Her wide-ranging exploration of the south interweaves Scott’s personal history with discussions of colonial settlement of the region, local leadership of Clarksville and the larger Nashville area, and race relations. In this new edition, Bill Hardwig provides an analytical introduction that guides the reader through Scott’s intricate and winding exploration of early twentieth-century Tennessee and her own past. He notes at once Scott’s ambivalence toward her native South and yet the nostalgia with which she recounts personal memories. Complicated yet critical to a full understanding of Evelyn Scott and her literary legacy, this edition of Background in Tennessee makes available an important voice in Tennessee’s literary history for a new generation.
TABLE OF CONTENTS
Half Title
Title Page
Copyright Page
1
2
3
4
5
6
7
8
9
REQUEST ACCESSIBLE FILE