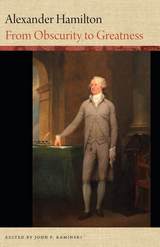 Born in 1755 on a small Caribbean island to unmarried parents, Alexander Hamilton did not enjoy the privileges of wealth or heredity by which so many of his contemporaries advanced to the highest levels of power. Yet Hamilton's natural ability and ambition earned him prevailing influence in the American Revolution and the government created thereafter, eventually securing his place in the pantheon of America's founders.
Editor John P. Kaminski has gathered a remarkable collection of quotations by and about Alexander Hamilton that paint for us a nuanced portrait of a complex man. Through his own words and the words of his contemporaries -- including the man who killed him in a duel, Aaron Burr -- we can gain a better understanding of this fascinating man who rose from anonymity on a small Caribbean island to the corridors of power.
AUTHOR BIOGRAPHY
John P. Kaminski is the founder and director of The Center for the Study of the American Constitution in the History Department at the University of Wisconsin-Madison. He is director and co-editor of The Documentary History of the Ratification of the Constitution of which twenty-seven volumes have been published by the Wisconsin Historical Society Press. A leading scholar on Constitutional history, Kaminski has also published another twenty-six volumes on a variety of topics in the American Founding Era and is the author of the America's Founders Series. "Alexander Hamilton" is the first in a series of Word Portraits of America's Founders that Kaminski is producing for the Wisconsin Historical Society Press.
REVIEWS
Alexander Hamilton was once the least recognized face on any dollar bill, but as the unlikely subject of a hit musical, he’s now known to people who have never opened a history book. In From Obscurity to Greatness, UW-Madison’s John P. Kaminski tries to add flesh to our understanding of America’s first Treasury Secretary by culling through diaries, letters and 18th century newspapers, curating a selection of quotes by Hamilton and about him. Turns out he was not well loved by his contemporaries. Abigail Adams to her husband John: “He has so damned himself to everlasting infamy, that he ought not to be Head of any thing.” Although credited with saving the young United States from bankruptcy, Hamilton was criticized for being born out of wedlock. Kaminski believes that a fragile sense of honor led him to accept Aaron Burr’s fateful challenge to a duel. (Dave Luhrssen, Shepherd Express, January 2017)