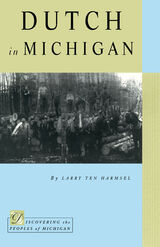 Even though they are historically one of the smaller immigrant streams, nineteenth-century Dutch migrants and their descendants have made parts of West Michigan their own. The first Dutch in Michigan were religious dissenters whose commitment to Calvinism had long-reaching effects on their communities, even in the face of later waves of radicalized industrial immigrants and the challenges of modern life. From Calvin College to Meijer Thrifty Acres and the Tulip Festival, the Dutch presence has enriched and informed people throughout the state. Larry ten Harmsel skillfully weaves together the strands of history and modern culture to create a balanced and sensitive portrayal of this vibrant community.